This time - it's no different.
Market is going on in Houston this weekend (along with the World Series right down the block!...) & I'm home. And, while I miss getting to see everybody & all the hubbub of Market... I'm glad I'm home this time.

Glad because, I've had more time to work on my quilt designs for a holiday fabric collection that will debut in a couple of months - as well as sorting though the strike-offs for my spring collection... (& trying to keep them all straight!)

But mostly because I get to spend some quality time with this little guy. 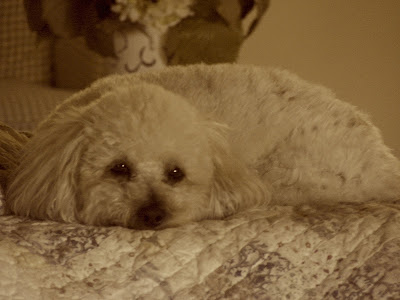 Bailey has had some tough days weeks lately, & so I'm glad that after all the vet visits (where he has been such a trooper!) that I get to spend some extra time with my little old pup.

I'd been thinking that in Bailey's 11½ years - it was pretty normal that he seems to be a little more  distant than he used to be... I know that can happen when dogs get older... a little turn of a corner in his senior years... But, then for a few days it seemed like things had taken a bigger turn than expected. He seemed to be having some sort of seizure (I was at first afraid that he might have been bitten by a snake) ... but then it got better... & then about a week later - it came back.
This time - we went back to the vet & he discovered that he had an ear infection in his right ear, & when he checked his left ear... there was no eardrum at all. Nothing.  That explained why Bailey was often not responding to his name being called... he couldn't hear as well as he used to. So, we got the treatments needed for his right ear & a lesson on how to do the ear wash & drops.

Then, just to be thorough (thankfully), the vet checked everything - heart, lungs, all his little 'old man bumps (as I call them)... & then his eyes...
I have known that Bailey's eyes were getting a little cloudy... & with his 11+ years - it didn't surprise me... & they have been checked several times this past year... but this time there had been a change.
A big change.
It seems that the iris in both of his eyes have iris atrophy. The vet had me look into the scope & showed me how the edges of his iris has a reverse scallop edge... & as gently as he could he let me know that if a human - he would be considered legally blind. He can see light & dark forms & shapes - but no details. The vet showed me how Bailey didn't even realize when he flicked his fingers in a very quick motion in Bailey's face - that should have made Bailey finch... & he had no response... not even aware of it. So, I could truly tell that he wasn't seeing much at all.

It explained so much of what I had been noticing in the little changes in Bailey's behavior. But, he is so familiar with his surroundings... that he is able to compensate amazingly well. (I was thinking of moving around the furniture in a couple rooms... but that won't be happening now.)

I've been reminded that for now... it's good to be home. Changes are happening... changes that I knew would come someday... & so I'm just celebrating this sweet season for as long as I can.