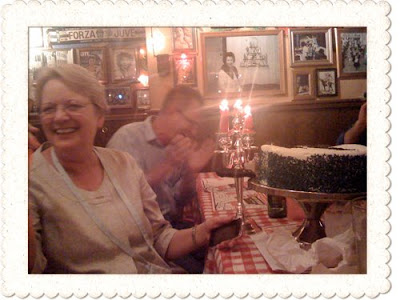 . . . (or this title could be: 'Bren is an idiot!')
Okay. . . here's how it went. . .
When I got my iPhone a few months ago, I decided that - since one of my goals for the year is to not forget my friend's & family's birthdays (so that I would at least remember to send a card!) - I would enter into my iCal - everyone's birthdays. A good plan - except that when I entered my friend's Nireko's birthday - I must have gotten distracted & I forgot to change the month before adding my friend, Anne Sutton's birthday. So there it went - into the month of May.
S0 when we are making plans for Market & trying to arrange a dinner for an ever growing number of folks. . . I was plugging the dinner into my iPhone & I saw that, hey! we're going to have dinner on Friday & that's Anne's birthday! I had remembered that Anne's birthday was always around Market - so in the midst of juggling Market plans - nothing seemed out of place. I even e-mailed Lynette & dinner grew into a birthday celebration for Anne - with the restaurant making their special red velvet birthday cake & all that goes with it.
So between Lynette & I. . . the word began to spread around Market - that it was Anne's birthday(!). Folks came up to her booth - giving her birthday wishes & all. I must admit, that I was pretty pleased that we would get to do something for Anne. . . I was looking forward to dinner & her getting her cake. . .
. . . That was until she leaned over in the cab - & in the nicest way she could, she whispered, "You know, it isn't my birthday."
My eyes must have popped out of my head & I think I said something very distinguished like, "Whaaa??"
I thought, "Sure it is!. . . My iPhone says so!" But yet, I discovered that, although I would like it to be, & although it's a cool gadget/phone. . . life is not controlled by my iPhone.
Sigh.
Thankfully, Anne was a trooper & went along with it all the way. In fact - as the evening went on - the whole mix up (aka - my big goof-up) got more & more amusing. (But wait. . . what's Anne doing with that knife?!? Good thing she was such a good sport!!!) 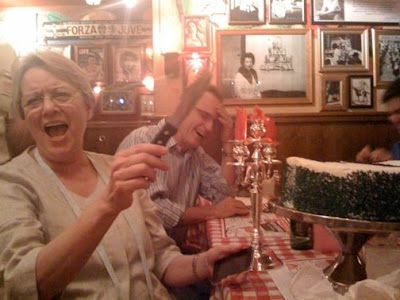 As it ends up - I had the right day - but Anne's birthday is actually around FALL Market. . . (oops) - In October - NOT May. (A fact now noted (correctly) on iCal in my iPhone.) We have actually decided that this will now start a new tradition at Market. So, for Fall Market - we will go out to dinner & celebrate everyone's birthday that happens in the spring! This way - we will all get two birthday celebrations! Hopefully this will turn into a happy accident!
Here's a photo (yep, from that same iPhone. Sorry - when the lights are low. . . the photo's go a little fuzzy) - of sweet Lynette Anderson & her charming hubby, Vince. Aren't they cute?! (So, sorry Lynette that I messed up. . .! by 6 months!) 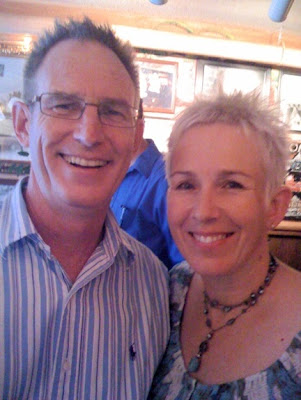 (Funny (odd) . . . most of my people photos were taken at restaurants!)
I only had 2 days at Market this time - so on my last morning Pam, Elizabeth, & I had a lovely breakfast at the Westin. (Sorry Pam. . . my food photo didn't turn out. . . I promise I will learn how to be a better blogger & learn ( & remember) to take photo's of my food!) :o)
If anyone in the restaurant might have been wondering/suspecting perhaps if this was "The" PKM. . . I think that my photo of her. . . relishing that cup of coffee would confirm it. Oh yea. . . that's PKM herself! :o) 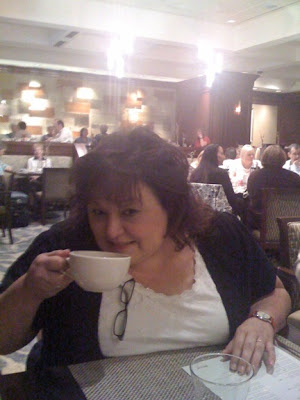 And, tucked into the corner - on the other side of the table is Elizabeth & me!. . . (playing with our iPhones.) Turns out Elizabeth is quite the iPhone app queen! Who new?! 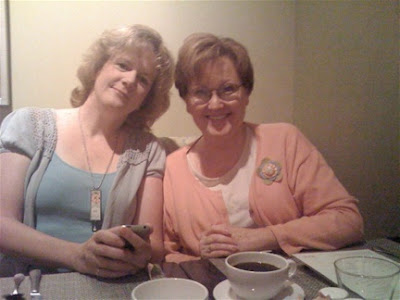 So there it is. . . my version of Spring Market. I wasn't there the whole time - so my version is a bit short. I do also have some photos of some of the wonderful quilts that were part of the quilt exhibits - but I am going to save those for some special posts a little later.
Now it's time to get going on new things for Fall Market! It's arriving about 2 weeks earlier this year (in early October this year!). . .
. . . That would still be before Anne's birthday. . .( sigh)
xo, Bren
Posted by little acorns 6 comments: 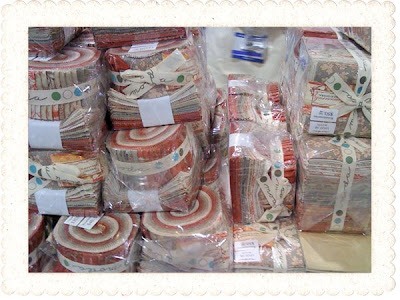 There they are. . . the darlings of Sample Spree. . . fabrics bundles, jelly rolls, & layer cakes.
Sweet medicine to heal whatever ails a quilter's heart. These happen to be from the Moda table. . . & are from the upcoming line, 'Rouenneries' from French General. (. . . & yes - I bought one of everything they offered in this line!)
The room is filled with tables that represent designers, & other fabric companies - & at some point each of the tables is swarmed with quilters . . . but everyone knows. . . the company that really makes a huge impact (. . . like get out of the way when they open the doors - or else you'll really understand the meaning of 'impact'!). . . is Moda, & their multiple tables . . piled high . . . with the newest Moda releases.
Here they are before the doors open - creating the mini towers of wonderfulness. . . 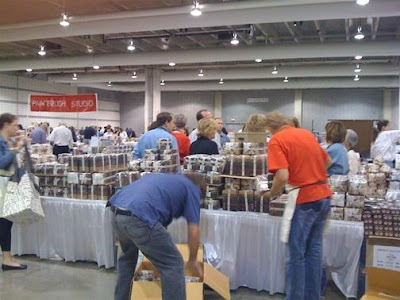 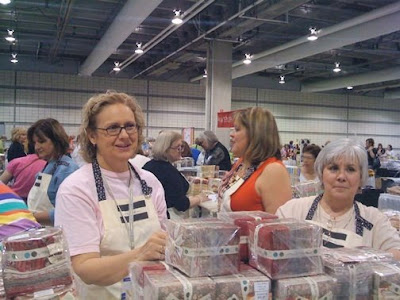 . . . then the moment finally arrives. . . the doors open. . . & it's time to high-tail-it to safety - if you are anywhere near the Moda tables. Seriously - it is honestly as much fun to watch the folks line up to get pictures of the "rush"!) As fast as they can fill the bags & write up the receipts - the Moda workers work in teams to get folks what they want. . . FABRIC! 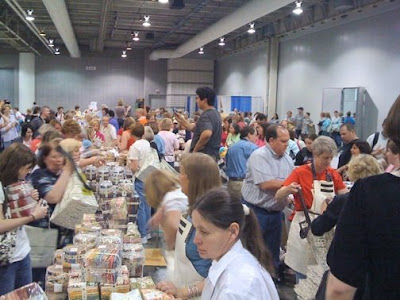 The next morning - the Market floor opens, & you are greeted by charming faces such as these, Bonnie (Cotton Way) & her daughter Camille (Thimble Blossoms). They are a mother & daughter design team with their second Moda line, Simple Abundance, making it's debut at this Market. Aren't they cute!!!? (Sorry for the poor photo quality - as the morning light into the convention center was intense!) 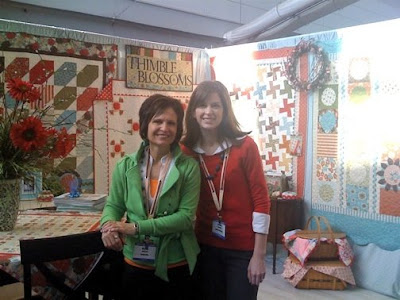 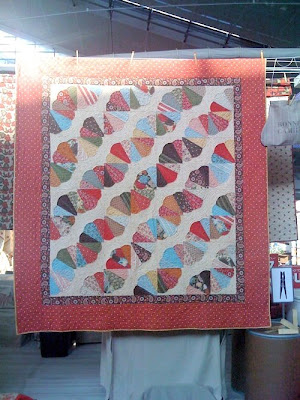 This is the Minick & Simpson booth. . . (I missed getting Lauries photo. . . but I couldn't help myself & took this photo of her wonderful new quilt, 'Coastal Lily', made from their new line, 'Wiscasset. I think it's stunning. . . ! 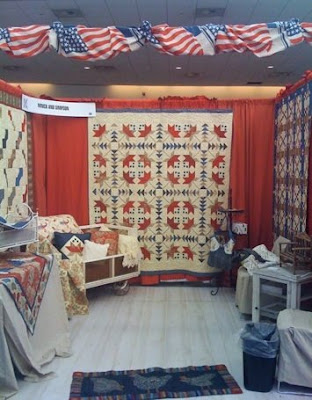 This is another Moda line (that is making me drool) - & it's the new 3 Sister's line called Aster Manor. (I keep my bundle by my bed & have been playing with the fat quarters every night!). . . so pretty! 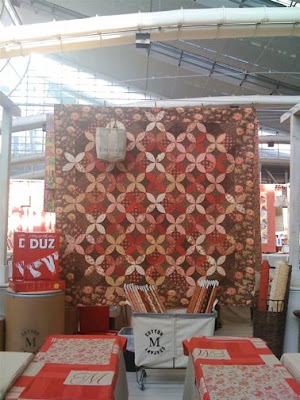 Then I got a sweet surprise & found, in the United Notions booth, my 'Frosted Windowpanes' quilt - made from the soon to arrive, 'Glace' line by 3 Sisters. Moda is even making kits for this quilt . . . so if you are interested - ask your local quilt shop! (& I know that FQS is also taking reservations for the kits!) 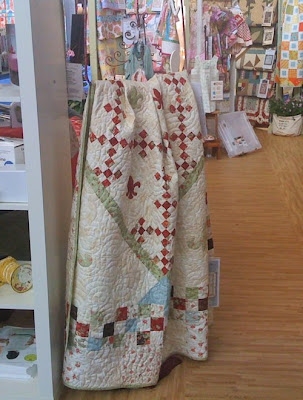 Before we leave the Moda area, I just had to show you this adorable little stitchery from Kathy Schmitz. I just love Kathy's designs & I always have to get a bundle of her stitchery patterns! Although it's really hard to choose, this one was my favorite . . . (can you guess why?!!) :o) 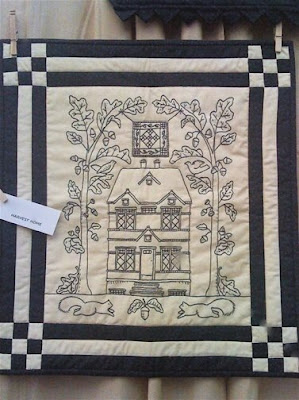 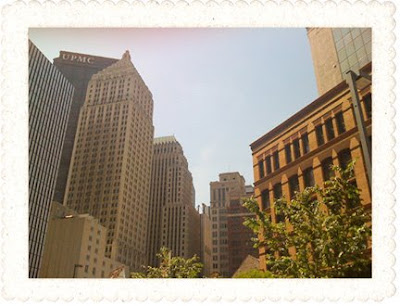 By now, you have probably seen more photos of Pittsburgh & Spring Quilt Market than you ever though you would, but I hope that you won't mind just a few more.
I was actually pleasantly surprised by the incredible skyline & architecture of Pittsburgh. The contrast of the old buildings & the newer modern buildings was stunning. I never tired of each new view.
. . . & then there were the bridges. . . lots of bridges!
This one was just outside the glass walls of the convention center, & was the backdrop to a meeting that I had . . . 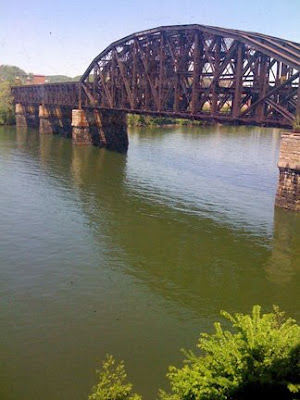 . . . What a great way to do business!
I snapped these photos with my iPhone (in fact all of them were) - on the first day of set up - walking across the 'glass bridge' that spans the convention center. Oh my. . .! What a chore setting up is! But is is also amazing what gets accomplished in such a short time! (1 1/2 days)
Here's the east side of the convention center . . . just a few hours into set up. . . 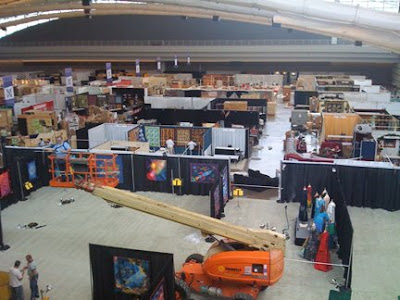 . . . & here it is the morning of the first day of the Market floor being open. 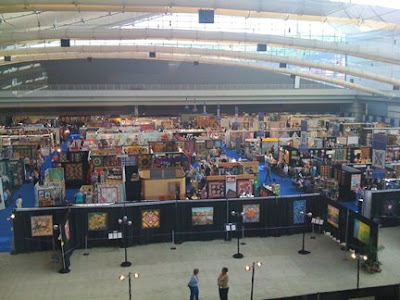 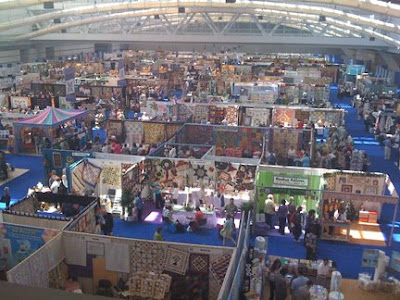 What a transformation! Amazing, isn't it?!
I didn't have a booth for this Market - (as I had to leave mid-weekend for a family event in Minneapolis), so I had the pleasure of getting to walk around & take it all in. I have often referred to Quilt Market as a quilter's 'Disneyland'. . . & that's just what it felt like this time! I did have a bit of business to take care of though. . . (more on that a little later!) ;o) . . . & I did a Schoolhouse presentation for Lecien. That was fun! It was just like being in front of a classroom again. . . & I felt right at home. (I'll certainly be doing Schoolhouse again at Fall Market!)
So there's the morning of my first day at Market. Next, there will be some more of the fun & of the wonderful people there! 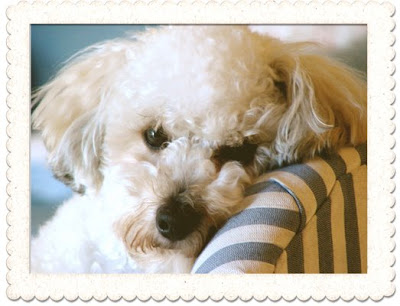 You found me!
It was just a matter of time, I guess. For all the time I've been blogging . . . (a few years now), I have always done my blog through my iWeb, which for the record. . . I love, but it has become clearer to me that many folks just couldn't get the blog to open on their PC's. . . (because they don't seem to like to play nice with Macs) . . . so Bailey - my official assistant - & I had a long conversation about it & we both agreed. . . it was time.
Sigh.
So here we are. . . I'm hoping that I will be able to get up to speed with a new blogging format quickly. . . & will try & post as often as I can. . . (& now I will be able to post from anywhere. . . not just from home!) :o) (But if you want to check out the older/other blog - you can click on the tag on the sidebar.)
So, I hope that you come back often, & visit, & comment your hearts out! There's lots to come!
xo, Bren
Posted by little acorns 30 comments: