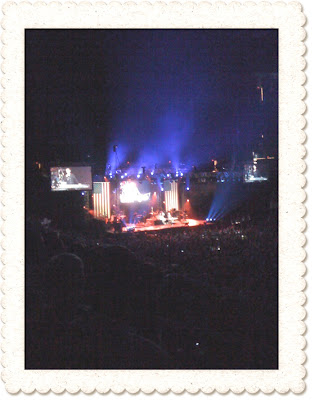 When your Dad reaches 81 years . . . it can get harder & harder to find. . . just the right gift. Especially for Father's Day. There have been countless ties, books, crafted projects, (& for me quilts too). . . So what's a daughter to do? It's can get a little difficult!
So last spring, after he had seen something on TV, my Dad mentioned to me about the 'Freedom Concerts' & how all proceeds were going to the 'Freedom Alliance' - for scholarships for the sons & daughters of service members killed in action . . . & then when he said, "I'd like to go to that sometime", - I got online & found that they were going to coming to Phoenix, AZ in early August.
That was it. . . ! It was perfect! So it became my 'Father's Day' present for my Dad, & a "date" for us. It's about a 2 hour drive to Phoenix from were we live - but it was worth it. There were some precious memories made that I will never, ever forget.
It was a wonderful concert - focusing on what is so precious to us. . . not only celebrating the precious gift of freedom that we have - but more so the men & women & their families that sacrifice & make it all possible. There were a lot of performers - who were all great - Lee Greenwoood, Charlie Daniels, Rich Little (who has only gotten better & better - & was so very funny with his impressions), & Billy Ray Cyrus. . . but . . . by far my favorite (& the crowds too) performer was Michael W. Smith. 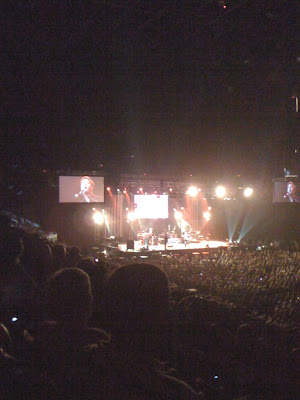 Michael - just seemed to really bring it all home. He sang songs that touched everyone's hearts, & he moved the audience to tears. He talked about how just before the concert, he had met the family (The Daggetts) of a soldier who was killed in Afghanistan a little over a year ago & he found them in the audience & dedicated his song 'How to Say Goodbye' to them.
Hardly a dry eye in the arena. . . & after he finished - something amazing happened. The entire audience - almost quietly clapping - slowly stood & faced the Daggett family - as if to express love & say, "thank you". It was something I've never experienced at a concert. It was humbling, & made us all so very aware of the price of what we take for granted.
For his final song, Michael W. Smith performed a song that he wrote soon after Sept. 11, 2001. It is called 'She Stands', & I encourage you to take a few minutes to watch & listen to this wonderful song here.
The audience was so moved that when Michael W. Smith left the stage. . . the audience called for him to come back for an encore. Seriously. . . he could have performed for the rest of the evening & I think everyone would have been just as happy.
For the encore (which he clearly wasn't prepared for. . .) he sang a little medley of some of his songs, & then had the audience sing with him - first his song 'Friends', then 'America the Beautiful', & then "Amazing Grace". The crowd got out their cell phones (because lighters are no longer allowed in arenas!) & lit up the arena. 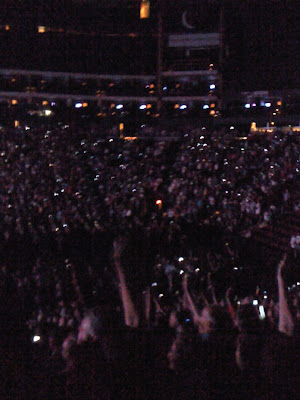 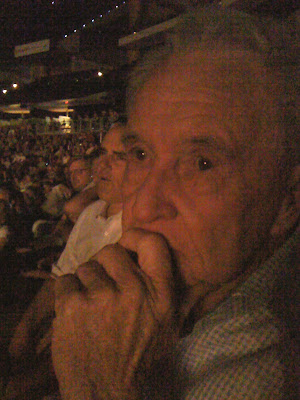 Hi Bren, I hope you can feel my hug as you mean that much to me. I know you are enjoying each and every moment with your dad as lots of your friends wish they could with their dads, me included. Thank you for sharing this special moment. My wish is for everyone to always remember why we enjoy our day.

Brenda,
Thank you for sharing your special "date" with you Dad. I have been listening to Sean Hannity talking about the Freedom Concerts for at least 6 months. I no longer have either of my parents with me. Hugs to you and your Dad both. Louise

What a wonderful date with your Dad! My Dad passed away nearly 20 years ago...and I miss him more each year! He would be 85 if he were still here.

Okay, now I'm crying! Lovely post, Bren! As a former military person and current military spouse, thanks to you and your dad for all of your support. We've had some friends not make it back home, and whenever I hear of events like this, I know they will never be forgotten. Hugs to you!

What a wonderful gift you gave your Dad....Time! And I love Michael w. Smith..so glad you were able to go!

Oh my gosh Bren how wonderful this post was! You had a precious moment in time with your dad that you will always remember. What a tribute to him and our country. So well said!

What a lovely memory for you and your dad! Take care!
Paulette

I bet you AND your dad had a WONDERUL time you'll never forget. I wish now that I'd gone to the Freedom Concert here in Dallas almost 2 wks. ago. I LOVE what they're doing and Michael W. Smith is AWESOME!!

I'm all teary, can't decide which I find more heartwarming: the concert purpose or the date with your dad. Beautiful post, thank you for sharing.

What a fantastic, thoughtful present to give to your Dad and to yourself! It sound like you both had a great time and how couldn't you??

W O W ! ! ! !
How wonderful was that? You touched me with your concert recollections - what a wonderful way to celebrate Father's Day! He's a lucky guy to have YOU as a daughter!

How wonderful for you and your dad...and how great that you captured it all with your camera...

Hi Bren,
Great to catch up on your blog. The rest of the fabrics are awesome. well done. It sounds like you had a beautiful time with your Dad. Michael w Smith has been my favourite singer since I was a teenager. He has such a gift. I spent many an hour crying to "Friends" as a younger girl. I also love everything Francine Rivers has written. Seems we have more in common than we thought.
Rosalie xx

Wiping away tears here. Your word describes it the best ... precious. I would give everything to be able to spend a day like yours with my dad who's been gone 36 years. xo

Thank you for your post. Hug your dad once for me too.
mary

I love to visit your blog...
I always get more information..
Thanks


--
Michell
Are you scared to be alone at home need security