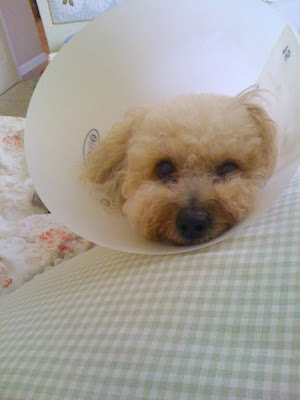 He is having to wear what my friend calls the 'cone of shame'.
Not a bunch of fun.
He has only had to wear it once before (when he bit open the stitches from his 'little boy' procedure. . .), & for the first day, he pretty much was afraid to move at all. Giving me the, "but Mom, why?") look. 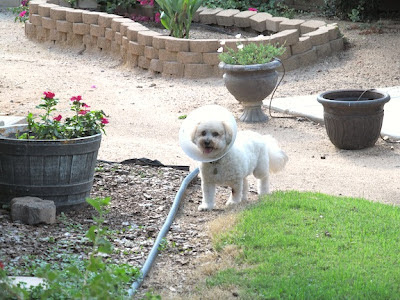 This time, he's having to wear it so that hopefully his leg can heal.
(You can maybe see the spot on his front left leg.)

He has a habit of licking & 'nibbling' it. That's why it looks so dark. . . the saliva  turns his creamy coat darker, & his skin is actually much darker than his coat, so when it is exposed, it really stands out.

His groomer shaved the area for me the last time he was groomed, so that I could apply the ointment from the vet & then bandage it - so that he wouldn't lick it off. . .
. . . but this cute little stinker just started nibbling above the bandage, pushing it down & actually starting a new spot. (!) 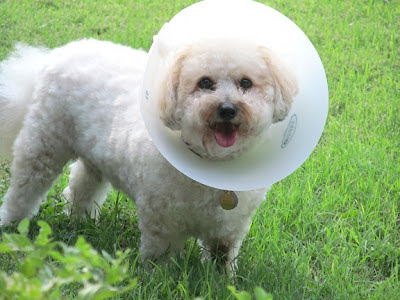 His spot is getting much better & healing over, & I'm hoping that in the time he's wearing it (for almost 1 week now) he will lose the 'habit' of fussing with his leg.
In the 'mean-time', he's also been on a much more restricted diet - to check for allergies (in case they might also be involved.) 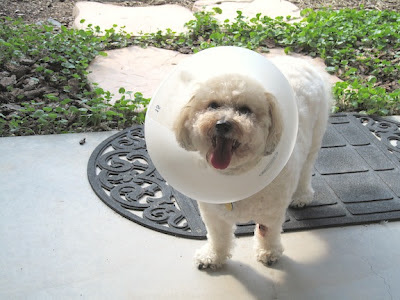 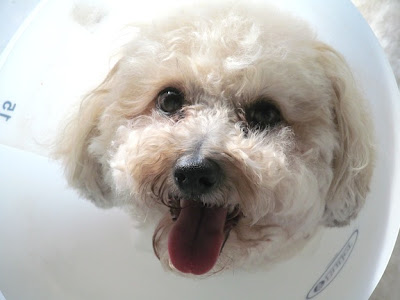 Email ThisBlogThis!Share to TwitterShare to FacebookShare to Pinterest
Labels: bailey

Poor sweet thing. The last pic says it all...'I will rise above this!!'

Poor pups! When Edgar had to wear his "cone of shame" for a few weeks, we found a product at PetsMart similar to a life preserver that was much easier for him to wear, and he didn't knock into things so much.
Poor pups!
Toni
www.lifeinapinkbunnysuit.com

One of my pups licks he same spot on his leg. No wound to the skin occurs because he is sort of *ahem* short of a few teeth in the front.

Awwww, what a sweet boy. Bad boy for licking, but sweet! Hopefully it won't be much longer. Kisses from Penny and me!!

I'm really enjoying embroidering Betsy's closet. I need to get my pictures posted soon on the stitch-a-long. I purchased my kit from your store. Quick question...what is the name of the fabric/# of the little roses on white and on pink? I'm thinking I might want to do the backing in this. So beautiful!