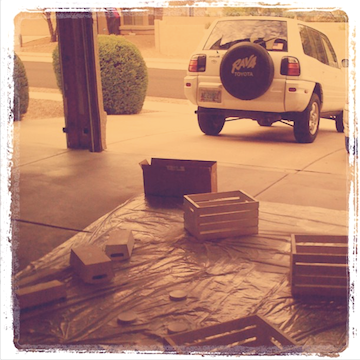 After subbing for an entire week last month,
I've been feeling like I've been trying to catch up ever since.

I even took some photos!. . . meaning to post them.

One (still on my camera. . . what can I say, I'm claiming 'lame blogger'),
is a cute photo of Bailey. . . just outside on the back patio.
I took the photo because he had just been thoroughly brushed
just about an hour beforehand. . .
. . . but he had just been 'helping' Dad in the backyard.
He (Bailey) was covered head to tail in little leaves, blossoms, grass
. . . & who knows what.

What I did discover - later that evening (& all that night. . . & for the next few nights) is that little Mr. Bailey must have  found some little dead critter & made it a little snack & probably had rolled around in the ground all around where he 'found' it.
(. . . why do they do that?)

Bless his heart. I almost wished for him that he could throw-up some of whatever-it-was, just so he (& me too) could get some good rest. Thankfully, I'm a pretty light sleeper - because the only hint I had - was that he would walk & walk around - more & more quickly around on the wood floors (. . . think little clinkity-clink noises from his little nails). Then it was me jumping out of bed & getting to the back door as fast I could get there. . . & little Bailey shooting out the back door to get to the grass as fast as possible.
Poor little guy!
The vet told me to be sure that he got plenty of water. . . as it can dehydrate them pretty fast. So it was lots of water & very plain kibble for several days.

But, it did do a number on my getting back into my 'regular' daily schedule.

I am in the midst of going through all of the closets & cupboards in the house - especially the ones in my studio & office. (There's a big hint there. . . get ready for a 'tag sale' announcement soon!)
I did get some wooden crates & boxes, & I got them painted one afternoon. They will be for when I re-do the closet in the guest room.

. . . things are definitely a-changing around here.
It's going to take a bit of work. . .
. . . but I'm really excited to keep checking things off my list.

Poor baby! Hopefully he will learn his lesson, but who knows. Can't teach an old dog new tricks?

Can't wait for your tag sale. There are always such goodies there! xo

Poor little guy, glad he is feeling like his old self. They all do that though not just Bailey..hugs for Bailey tonight. I desperately need to purge, clean and organize my playground. You know the one with all the fabric and thread!