First. . . just a little announcement that the 'Spring Sale' on the website - will be ending tomorrow. I decided to keep it going until just after the 15th. So, for those who haven't already. . .  be sure to check it out! (25% & more off patterns & books!)

How fun it was to hear from so many of you that have had (or still have)
a little Kenmore too! I've got to say, that mine really 'stepped up to the plate' (baseball term) for me! I've fallen a little in love with it again.
It's gotten a good overall 'oil-ing' & I do believe it gave a little sigh of relief when I finished putting oil in the about 20 places that the manual showed(!)

The good news is - is that the Bernina is also now happy & healthy. Although it was pretty scary, it was only that there was a lot of lint & 'fluff' that clogged up the 'drive shaft' (?) underneath the motor (where you can't get to), & the motor just decided "no more' until it got a thorough & proper cleaning. I'm really good about cleaning & blowing out (with canned air) the lint  that I can see after every bobbin change, & putting the little dots of oil on the bobbin case, but as I was talking about what had happened with the Bernina folks - I realized that this past year, I did some sewing with flannels as well & they can really add to the 'lint factor'. I loved using them & want to again - it's just a good lesson to factor that into my cleaning schedule.

So for now all the sewing machines are 'happy campers'. . . including this 'sewing machine'!. . . or should I say 'stitching machine'!?! I've been (happily) stitching away at some new projects. . .
here's a couple of little peeks. . . 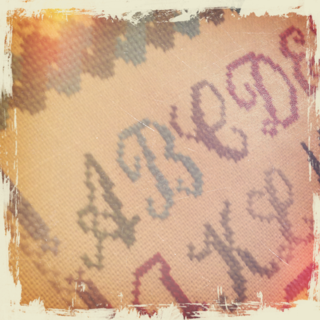 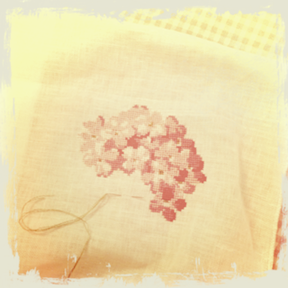 (do they look familiar?)

I'll be honest. . . it's been hard for me to put them down! I've had so much fun!
But. . . there are a couple of quilt patterns that are waiting to be completed & so I'm putting myself on a 'stitching' schedule'. Otherwise, I would spend the whole days doing nothing else!

Now, to hopefully start you week off with a smile (& a little sigh). . . I wanted to share this with you.
I get emails from a video site that has inspirational videos & they are so nice to watch from time to time in the midst of the things that normally make the 'news'.  This video is from an Australian version of 'The Voice' (we have an American version here as well). The premise of the show is that there are four 'coaches' (who are in the music industry & often celebrities) who's goal it is to create a 'team' of singers - that will go on to compete. (I'm not good at watching these shows - I get to nervous & the 'competition' part of it isn't my favorite.) But, for this show - the singers 'audition' without the coaches knowing anything about them - or even seeing them - (their chairs are turned around so they cant see the stage). This way, the  singer's 'Voice' is what the 'coaches' base their decision as to whether they want to have the singer on their 'team'. The fun part is that if more than one of the coaches choose a singer - that singer gets to pick who's team they want to be on. . . the tables are turned & the coaches do their best to get the singer to pick them(!)

Anyway. . . the young man in this video is incredible. . . & I admit that I have watched it over & over. . . it's that good. I keep finding little details that make it more & more wonderful. . . (watch the 'coaches' faces when they first hear him!)
I hope it adds a little inspiration to start off your week! (& I dare you not to smile!)

A MIRACLE Happens When This Teen Bullied for His Stutter Sings from theremix on GodTube.

What beautiful peeks at your stitching!
Enjoyed the vido - my godson stutters, so it was extra special.

Thank you so much Bren for sending us this video. What an amazing young man! I loved the look on the judges faces but more so the love on his brother's face...i am still smiling.

Awwww Bren -- that's an awesome video! Thanks SOOO much for sharing it -- Wow!

Beautiful! Brought tears to my eyes!!!