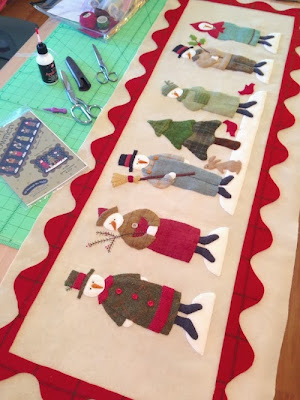 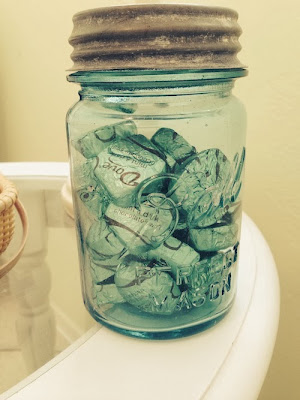 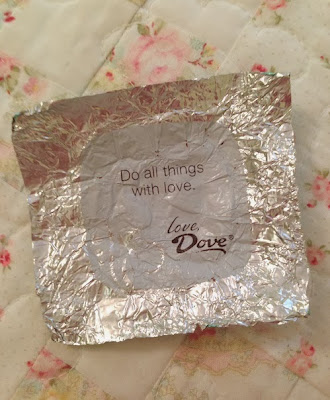 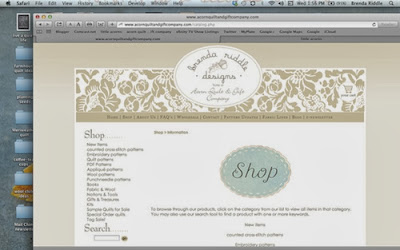 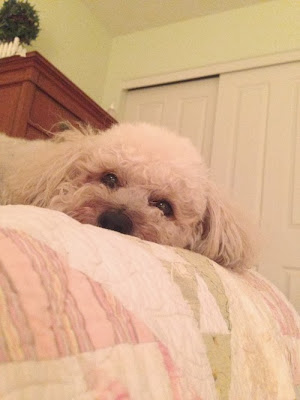 Thought I'd give you a look at my progress on the snow-people table runner. . . as it's getting close to the finished stage. I'm almost done with stitching the border down & then it will just be adding a few final touches & I will have this ready for decorating the house! I usually wait to start with decorating for Christmas until after Thanksgiving, but since Thanksgiving is so late this year, I've decided that I'm going to start decorating this weekend. Also, since being on Instagram (& following others). . . I've realized that most of the folks in other parts of the world have started decorating for the holidays! So, since I haven't added much to my autumn decorations for quite a while (need to work on that!),  I'm thinking that the white pumpkins that I have out can be incorporated nicely with some Christmas touches. . .

So with all the stitching that's been going on. . . I've discovered a new favorite. . . Dove Dark Chocolate Mint Swirl pieces.  Oh. My. Yummy-ness. I'm hoping that these are not seasonal as I'd love to keep them around all year 'round. (…& don't they look right at home in my aqua Ball jar?!?)

The other think that I've been busy with, has been cleaning out my office. I have 'straightened-up' in there over the years (I can be a 'pile-r'. . .), I have never done a big clean-out in there since I moved my office into the back bedroom almost six years ago. So, it was due overdue.
My thought was that it had to be thorough. . . & it was …every drawer, every file, every cubby kind-of-thorough. It took me 3 days, & to be completely honest - I still want to spend another morning to finish up a few more things. I took a photo of it when I was midway. . . but I'll save it for when I take the 'finished' photo.

With going through all the items in the office - I found a couple of boxes of items that I had pulled for my website, but they got buried . . . so now that I've done the photography & listings. . . I wanted to let you know that I've also just added pages (several of them!) of items (fabrics, kits, notions, tag-sale items) to the website! Also, we've added another colorway to the 'Remember 'Whooo' Loves You' special order quilt options. We're having so much fun with making these & if you've been thinking about having one made - to be able to give for Christmas. . . it's looking like the cut-off date for that will be mid-week next week. (Unless we get more that we expect & then it will be sooner.)

Hope you have a great week.
♥ Bren

your snow people are so sweet.

I just love your table runner! I know it was a lot of work but oh my goodness it was worth it to have that gorgeousness out for Christmas! I need to do a thorough cleaning of my sewing room as well. I wonder what I will find, hopefully something fun!

I will have to go to the store and look for those chocolates! Love dove chocolates, but have never seen the mint ones...yumm!

You're little guy is sooooooooooo sweet! such an adorable face. Love your stitching projects and your cleaning is an inspiration for a wet day. Happy stitching.
Hugs
Elizabeth

Oh Bren, that runner is gorgeous! I don't normally like snowmen, but wow, yours are so sweet and different.
Hugs
Jenny
x