Firstly, for all of you who have shown so much Betsy's Closet - In Stitches love. . .

You have kept me so incredibly busy, filling orders, making kits, & shipping. I've hardly had time to work on anything else.
Not complaining.
Not. at. all.

I haven't even had the chance to send it to my distributors yet (!) . . . Hopefully that will happen next week.

In fact, after many emails asking. . . I've finally decided that,
yes, there will be a Benji's Pockets - In Stitches as well.
I wasn't planning on doing one, but I've been convinced
that you would like a little stitchery for a little boy as well.
So, the blocks have been drawn, & I'm deciding on extra little stitching details.
But. . . I have two or three other patterns that I'm in the middle of,
so I probably won't get to stitching it until next month.

Here in Oro Valley. . . we have had a really nice summer.
Sure, we've had hot days. . . but we've also had a really good 'monsoon season' & wonderful summer rains. . . cooling things off & making the plants bud & bloom & re-bud again & again.
I've actually wanted to post about it - but I've felt so bad for the parts of the country that weren't getting the much needed rains. Please know that if you are in one of those areas - my prayers are with you!

I live in what is known as 'high Sonoran desert', & then I also live at the foothills of a little mountain range - so it's not the typical 'desert' scene. We have dirt - not sand. . . & while there are cacti that grow, there are actually more brush & trees. I live north of Tucson, AZ. . . which is truly a very small city.
(. . . & I like it that way!)

Sometimes though, it's nice to get to a bigger city - where there are lots more to choose from - shopping wise. . . & I end up going up to Phoenix about once a month. Often it's with some dear friends & we make it a 'retreat weekend' - sewing & stitching. I love those. . .  (& need them!)

Last month, & also this month. . . on the weekends that we went up to Phoenix (which is much hotter & is not surrounded by mountains - like the Tucson area is. . .) we experienced one of these. . . (!) 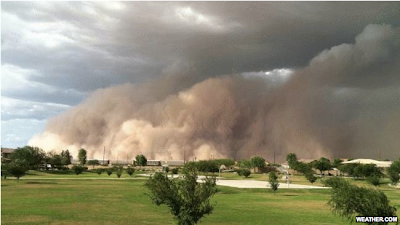 In fact, I got this photo of the dust storm that hit Phoenix last month while we were there.
(. . . No, I didn't take it, I got from weather.com. . . we were (thankfully) sealed up in the house we were staying at!)

What an experience (that I have now experienced twice!). You can see it coming. . . & then the wind blows like crazy & then the dust. . . It blocks out the sun, it get's a bit dark. . . & there's really nothing you can do. Since Phoenix is not surrounded by mountains. . . when the summer storms build up, the winds that bring them can stir up the dust from the desert & it all comes like a wall. Once it hits - it takes about 15 minutes or so for it to pass by. . . leaving a coating of fine dust/powder.
Amazing.
I have to admit. . . it was actually kinda fun.
Um. . . except the last time. . . when I remembered, just as it had hit. . . that because of the 100+ degree temps - I had cracked open the windows in my car. . .
Oops.
Yep, now I do know what it's like to be outside in the middle of one of these.
Let's just say there was some major holding-my-breath, & I'm not sure - but it might have been the fastest I have moved in a very long time. (!)

There was a bit of clean-up needed, but thankfully it wasn't too bad. It's just amazing how the dust/powder travels!

So, I hope that you have sunny days & clear skies. . . or rain if you are needing it!

Well I think I shall love Benji's Pockets too! I can't wait to get my pattern for Betsy's Closet to start my first block! What sweetness! You have such a great eye for that ;)

Glad you weren't hurt in the dust storm. Don't know if I'd want to go through one of those !

I would like to place my order for Benjie's Pockets, let me know when it's ready. Those Haboobs are kinda scary, at least the wind is not the twisty kind. We are trying to figure out how to block the dust from getting in the house. I really want a nice hepa filter on the AC unit, but I don't know how that would work in the storm. Glad you are keeping busy!

Glad you are okay. I remember my grandmother telling me about the dust bowl here in Oklahoma. We are in the worst part of the drouth. We can't water the yard (it's banned) and I drove by one of our little lakes the other day and the boats were sitting on the ground because the water had receded so much. My grandmother said it would get so hot that they had to sleep on the porch with wet sheets covering them. In the morning they would be covered with a crust of dried mud and would have to break out of their sheets. We have it so lucky with air conditioning! Well, waiting my my pattern order. They are selling like hotcakes! Cheery wave from Bev

I am so excited for my Betsy's Clothes kit to get here. I appreciate you and the wonderful creative art you make.

Wow! I am just amazed by that picture...and so glad you made it safely!
Take care of yourself!
Toni
www.lifeinapinkbunnysuit.com

I am so excited to hear about Benji's Pockets and can't wait until I can order it. I discovered Betsey's Closet at Shabby Fabrics while I was looking for fabric for the Spool Along hosted, in part, by Thelma of Cupcakes 'n Daisies. I sent Thelma a picture of my completed Spools quilt and mentioned Betsey's Closet. I said it would be a fun stitch-along, but I didn't have a blog to start one. Jenny of Elefantz saw my comment and, along with Kathy of Shawkl, began the Betsey's Closet stitch along. This makes me feel a bit like Tom Sawyer who talked others into whitewashing the fence for him. All I have to do is sit back and watch (or, in this case, stitch)! I have completed three of the blocks and am nearly done with the fourth. I hope to be able to keep up after I return to work next week. Do you think I could get away with a little stitching during some of the long meetings I will have to attend before the first day of school?
Thanks again for creating these beautiful patterns for us to enjoy.

How funny! I went to Amphi, but my sister started at CDO just a few years later. I loved the Catalina Foothills, but later I lived in the wider valley of Phoenix, on the west side, and I actually came to prefer it. Either way, I know how to tell my directions from the shapes of mountains one can actually see, and living now in the Great Smoky Mountains, I'm constantly confused, as they go and cover all their hills with trees! =) I do miss my desert, especially on humid days like today. Give me 110 dry any day instead of 90 wet!