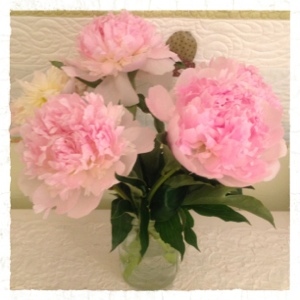 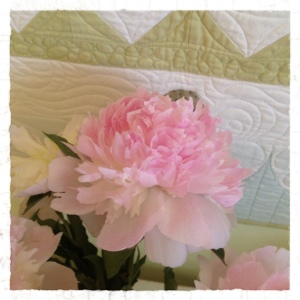 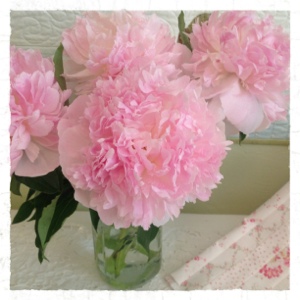 Where I live (southwest US), peonies are all but impossible to grow. After several years of drooling over seeing them on other folks' blogs. . . Brought in fresh in from the garden, when I went into our local Trader Joes market & saw them by the bunch, I just couldn't resist. (& for the record, I'm considering these the best $7 I've spent so far this summer!)

When I brought them home, they were all in their not-yet bloomed ball form. Believe it or not, the first two photos were taken about 20 - 30 minutes after I trimmed their stems & placed them in the 'vase' (for me - that is usually a ball jar, I just love flowers in ball jars.)! I was afraid they would only last a couple of days, but they stayed pretty for almost the whole week. For every day they were here, they made me smile every time I looked at them. I'm hoping to get another bunch before they are out of season. What a sweet treat.

On the design front, I'm so excited to announce that just a few days ago, I got my confirmation & room assignment to be an exhibitor for the Fall Needlecraft Market! (I'm so excited!) Needlecraft markets are put on by TNNA (The National Needlecraft Association), & while they have four markets each year, two of them focus mostly on the counted thread, embroidery, stitchery side of the industry, & this market will be one of those. So, I've been a busy little bee working on new stitchery designs, as well as getting a couple of new quilt patterns ready for release.

We've also been getting our summer heat waves starting. . . so it's been a good time to keep indoors for most of the day, & it's been good for getting a lot done. I know you'd never know that from my lack of blogging, & so I'll try & do much better on that front.

I'm also hoping to get some new 'tag sale' items up onto the website early next week. . . (yep, I've been stash busting again). . . so keep a look out!

Wishing you many pretty posies to make you smile!

Email ThisBlogThis!Share to TwitterShare to FacebookShare to Pinterest
Labels: home

Peonies are my favorite flower! I bought a pink peony plant today for the garden. We are one week into our new house it didn't have any peonies…I couldn't stand it! So excited for you to be in the Needlecraft market. Looking forward to seeing the new patterns! Blessings!

I'd love to attend. Thread heaven!

Gorgeous peonies! Mine are not ready to bloom yet - still cool and rainy. We've only been out on the pontoon once this year!

When I brought in Peonies I also brought in ants. Haven't brought them in since. I love them, but I have to leave them outside.

I love peonies... and pink ones are even better!

Living in California, I, too, miss the beautiful peonies which used to bloom in my home state of Minnesota during June, my birthday month. Alas, we don't even have a Trader Joe's in our town!

Next to hydrangeas, peonies are my favorites. I have a beautiful white one with pink tinges. It has the most glorious fragrance I just love. I know a photo isn't the same but maybe you could just take a pic of them to get you by. Enjoy the market!

I love peonies but have never tried to grow them. Must put that on my retirement to-do list!