Last week when I posted about Bailey & his new 'mystery' spots on his back . . . I never thought that this wasn't a secluded incident. . . but apparently . . . Bailey has quite a few newly freckled buddies!
I've received some e-mails from a few of you about how your dog has had the same thing happen to their fur & so I thought I'd do a Bailey post & let you see his 'fur journey' & what I've learned so far. . . (&, well, Bailey really likes it when I post about him . . .)
This is a little photo mosaic that I made showing how Bailey looked at 9 weeks & in the first few months that I had him (center & upper right) . . . then at 4 months - after his first haircut (lower right). . . & then what he has looked like in this past year - in his second year (upper & lower left). What a change, yes!? 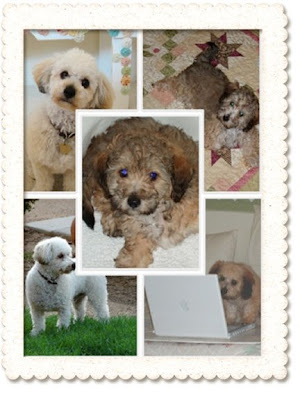 With every haircut - his coat has progressively lightened, with now just a little of the black & brown on the inside part of his ears. Bailey's mommy is a white Bichon Frise, while his daddy is a black poodle. . . & Bailey also has the dark skin - from his poppa. . . so I thought that his coat was going to always be darker. . .
But pretty much every 6 months or so . . . it just kept getting lighter, & I kept seeing changes.
Here's a photo (one of my favorites!) of his very first bath . . . (look how little he is!!! When Dad's had was extended - it was as big as his body!) 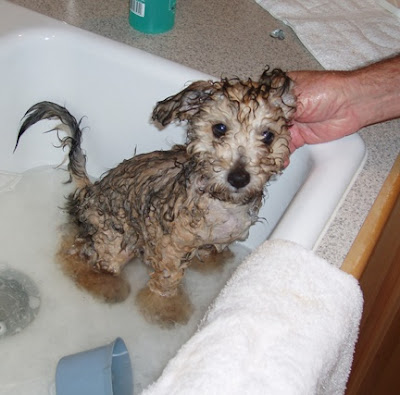 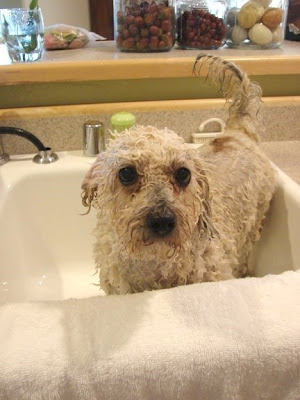 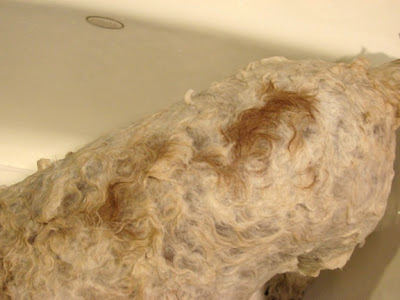 Can you see all the brown that is appearing. . . & in the past month the amount of brown spots has grown from none to two smaller spots. . . & as you can see in this photo (especially when his fur is wet) - the brown patches are growing!
This past week, Bailey was due for a shot/vaccine, & so when we went to the vets, I took the opportunity & had him check the spots . . . just in case. They have never bothered Bailey - but I wanted to be sure.
When we arrived - the tech - who has known Bailey since he was a pup - noticed his spots right away & said that her dog (a poodle) that was the same age as Bailey (3 years) had also been getting some spots & she was baffled by it too! But, when Dr. Ivan came in & checked his out. . . he wasn't surprised at all (whew!) - & said that - given Bailey's coat transformations already - this was just a sign that he is maturing. . . (who?. . . my pup?), & that he might even get quite a few more!
So. . . we will see what the next six months bring!
Until then, Bailey will still enjoy his baths . . . well once he gets out of the sink part. . . He LOVES the 'after the sink part! - when he gets to wrestle with the towels & an old quilt . . . 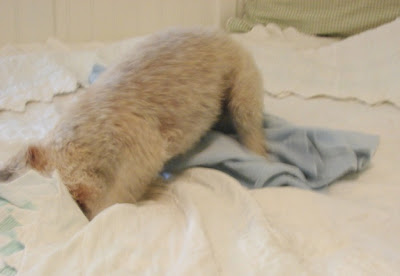 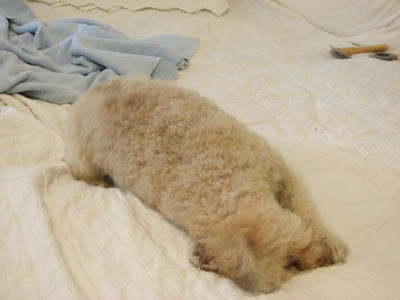 Then, when he's pooped himself out, he snuggles in, under the hairdryer (really. . . this little guy just loves the hairdryer. . . ) 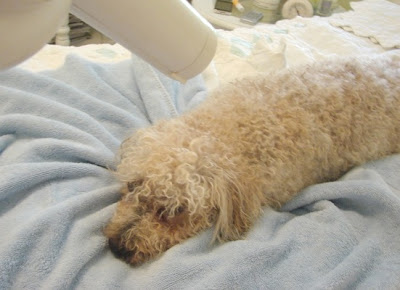 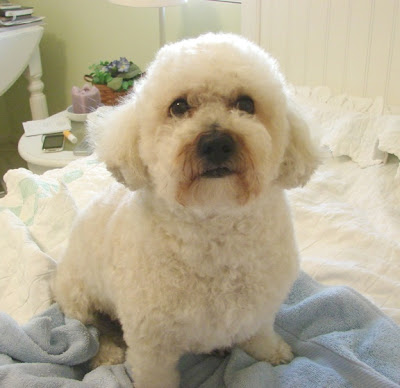 Then after we're "all done" . . . (Very important words in the bath-time process. . . You don't dare say them too early!), it's time for a few spins (& blurry photos) on the kitchen floor because "someone" knows that "someone's" getting a treat. . . 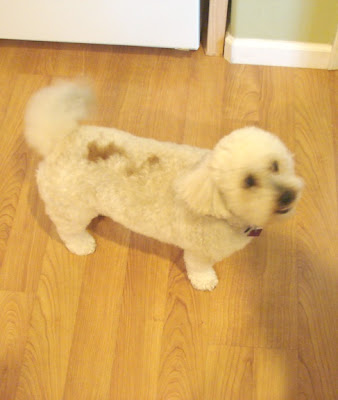 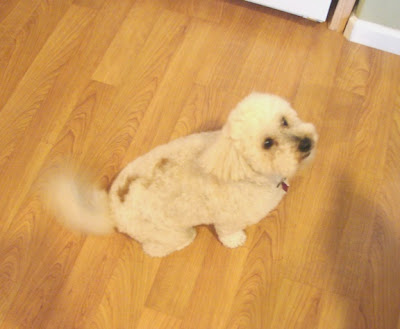 So there you have it.!. . . One mystery solved!. . . & now the mystery of what this pupper will look like in another year!
Bailey & I hope you have a wonderful weekend!
xo, Bren
Posted by little acorns

Email ThisBlogThis!Share to TwitterShare to FacebookShare to Pinterest
Labels: bailey

Hi Bren, I am so glad Bailey is just fine. I know how worried you must have been. Looking forward to seeing you real soon and your next project for us to enjoy. Mah

Hi,
I also have a Poochon, half poodle and half bichon. My Gracie is a rescue and had been abused. She, however, is an albino with pink nose, eyes, lips, and skin. I love her to bits.
Marilyn - in Long Beach, CA

loved seeing all the photos of bailey,how he's grown and changed.
he looks so sweet!

What a total cutie! I love the after-bath shenanigans!

Bailey's waaaaaaaaaay too cute! I noticed you were reading Francine Rivers....have you also read her Mark of the Lion Series? It's my all time favorite epoch.
Nadine

Oh he is just too too cute! I am just in love with his "puppy bath time" photo! Too bad they don't stay babies forever! (furry children, you know...)

Bailey is so sweet. I am a huge dog lover. Love your photos of your baby.

Bailey looks exactly like our Mickey .. he was a found dog .. the vet said he believed he was bichon frise and poodle mix as well .. it is like looking at our own dog .. so adorable and I sure very, very friendly ... Karen CA

Bailey is adorable!! I love the hairdryer photo. And the first one in the sink. lolol

I have returned several times to look at sweek Bailey. The pictures are adorable. Give the pup a hug for me too!