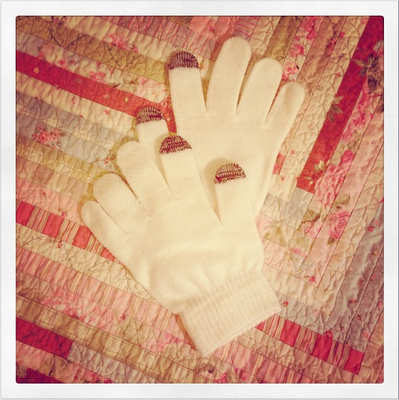 Who would think that such simple little things
could make me so giddy. . .

But, while at church on Sunday,
I told a friend about my upcoming trip to Minneapolis
& she told me about these little gloves that she got at Target.

I'm very excited about my trip to Minneapolis later this week.
(The last time I went this time of year - they had just had a blizzard!)
The weather looks like it will be very nice,
(not too cold - but cold enough - it is winter after all!)
I know they have gotten a little snow
& I just hope that some of it is still around. (sigh)

I realized that I will be out of the studio/office for a few days after
the website sale (Counting My Blessings) was scheduled to end - so I will
be extending the sale until December 4th. . .
(25% or more off all patterns & books!)

. . . my dear friend, Jacquelynne Steves,
the incredibly talented designer behind The Noble Wife,
is looking for some feedback & your opinion & is doing a giveaway
as a thank you to those who respond.
If you would like to participate - you find the blog post here!

Hope you have a wonderful week!

He is such a stinker, isn't he? But hard to resist that little face. Hope he is a good boy for Nubin. Have a safe trip to MN and enjoy the snow. Whenever you are missing the rain...

Oh those gloves are a great idea! I will have to look for those- thanks for the heads-up :)

Thanks for the heads up on the gloves..i will have to add three pair for my girls..good stocking stuffers! Safe travels!